David Rothberg has been serving Temple Chayai Shalom as Cantorial Soloist since 2011. He is known for his ability to shift from a traditional to a contemporary sound on a dime, his expert guitar work, his warm engaging voice, and his enthusiasm for teaching Jewish subjects, both musical and not. 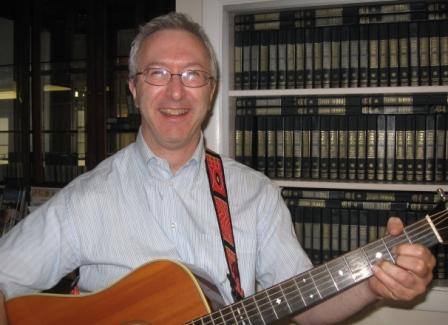 A veteran of many musical worlds — acoustic singer-songwriter, classic rock, jazz and blues – David uses all of his diverse musical experience to create an exciting and uplifting musical culture.

A mid-life career changer, he began as an advertising executive, but was eventually drawn to the Jewish world by an ever-growing interest in his heritage. In 2000, he made the big move — to live in Israel for a year to study Jewish texts. That one-year project turned into three years at the Pardes Institute for Advanced Jewish Studies and the Hebrew University in Jerusalem, from which he received a Master of Jewish Education degree. Upon returning to the United States, David was a founding Judaic Studies faculty at the Shoshana S. Cardin School, a Jewish Community High School in Baltimore and served as Judaic Programs Coordinator at the Rashi School in Newton, MA.

David loves the diversity of his role at TCS – fostering a musical culture, leading worship, writing new music, creating events such as Rockin’ Shabbat Eve and Hippie Shabbat, working with bar/bat mitzvah students, leading choirs, and teaching everyone from pre-school to seniors. He believes that, for many people, music can be a key to Jewish connection and community, and aims to strengthen that connection in his work.